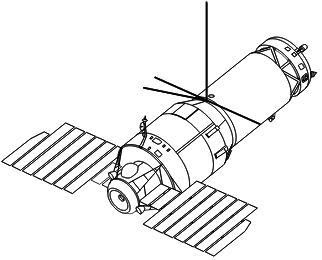 The above image is a line drawing of the Russian Almaz space station configuration, flown as stations Salyut 2, Salyut 3, and Salyut 5. Image Credit: NASA

August 8th marks the 35th anniversary of the re-entry and burn-up of the Soviet space station Salyut 5 (August 8, 1977). Salyut 5 was the third and last space station in the Almaz ("Diamond") program, a series of secret military reconnaissance space stations launched by the Soviet Union under the cover of the civilian Salyut program. The three Almaz stations were launched as Salyut 2, Salyut 3 and Salyut 5. The Almaz program was also known internally as "Orbital Piloted Station" (OPS). Salyut 5 was known internally as OPS-3 and Almaz 103.

Salyut 5 was launched June 22, 1976 and publicly announced once it was safely in orbit. Two Soyuz missions visited the station — one in the summer of 1976 and one in the winter of 1977. Each mission was manned by two cosmonauts. A third Soyuz mission attempted to visit the station, but failed to dock, while a fourth mission was planned but never launched.

In 1978, the Soviet Ministry of Defense judged that the time consumed by station maintenance outweighed the benefits relative to automatic reconnaissance satellites. And so there were no further Almaz space stations.