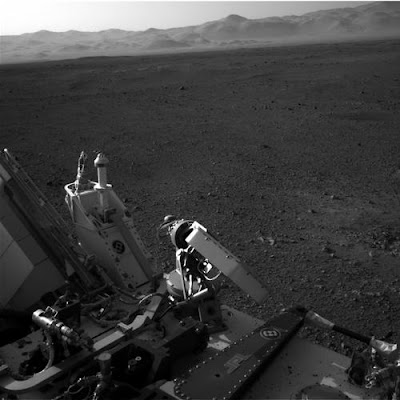 The above full-resolution image shows part of the deck of NASA's Curiosity rover, taken by one of the rover's Navigation cameras (Navcams) looking toward the back left of the rover. On the left, part of the rover's power supply is visible. To the right of the power supply can be seen the pointy low-gain antenna and the side of the paddle-shaped high-gain antenna for communications directly to Earth. The rim of Gale Crater is the lighter colored band across the horizon. The effects of the descent stage's rocket engines blasting the ground can be seen on the right side of the image, next to the rover. Image Credit: NASA/JPL-Caltech ﻿

NASA’s Mars Science Laboratory (MSL) / Curiosity rover mission will begin upgrade of the onboard computer software this Saturday, August 11th (this translates to Sol 5 of the mission). The process is expected to last roughly four days. From a Martian perspective this period translates to Sols 5, 6, 7, and 8. During this time, all other activities, including science, will be put on hold. This is to avoid any possible interference and to allow the engineers enough time to finish the software transfer and make sure that everything is functioning according to plan.

Publicity on the planned software upgrade has caused NASA and the MSL team to receive a fair amount of criticism from the more technically savy members of the general public. When compared to their notebook computers — or to their smartphones, for that matter — Curiosity's computer systems seem out of step with the times. But in order to explain, we will ask and answer the three loudest questions on this subject.

First: With a mission budget of over $2.5 billion, why doesn't NASA's latest Mars rover have the best technology available?

Answer: From the most important perspectives, Curiosity does have the best technology available. In designing the rover, the mission planners knew that Curiosity’s computer hardware must be highly reliable, very low power and robust against the higher radiation on the Martian surface. And, in order to be all of these things, they knew there would be some trade-offs. But even so, when compared to the computer hardware aboard the Mars Exploration Rovers Spirit and Opportunity, the NASA engineers consider Curiosity’s configuration to be a boost in performance. Here is a rundown of Curiosity's computer hardware:

Second: Why wait until after landing to upgrade Curiosity's software?

Answer: Because of Curiosity’s computer memory constraints. Prior to landing, Curiosity’s software was optimized for the mission’s cruise and the entry/descent/landing (EDL) phases. With landing completed, the engineers can now replace the existing software with a version that is optimized for surface operations, including autonomous driving, moving the robotic arm, and other activities.

Third: How do the engineers avoid making Curiosity totally unusable as a result of the upgrade? Or, to use a techie reference, how do they avoid “bricking” the rover (basically, ruining the upgrade, thereby giving Curiosity all the functionality of a brick)?

Answer: The Curiosity configuration has lots of redundancy. For instance: (1) It has a separate backup computer, which the engineers won’t update until they are completely certain the primary computer is working. (2) Each computer has backups of the current software, which Curiosity will switch to if it has problems with the new software. (3) The first running of new software is done in a process called a “toe dip,” reminiscent of dipping one’s toe into the water to determine its temperature before committing to jump in. In the case of Curiosity, the rover tries out the new software and then switches back to using the current version. Engineers evaluate the results of the “toe dip,” and confirm whether all is well with the new software. And, of course, the engineers will test the heck out of it.

The MSL engineers have been developing and testing the software upgrade procedures for months. And while the engineers might not compare this software upgrade to the thrills of Curiosity's landing night, it will probably be the most stressful computer software upgrade each of them has done in their lives to date. If nothing else, for the fact that everyone in the world will be watching and waiting.

Beginning Sol 9, with the software upgrade complete, the MSL team will resume its checking of Curiosity’s instruments and gathering of early science observations. This activity will include the resumption of transmitting higher-resolution versions of the images that Curiosity had taken through Sol 4 (August 10th).