MSL/Curiosity: It's Smudgy, But It's Color! 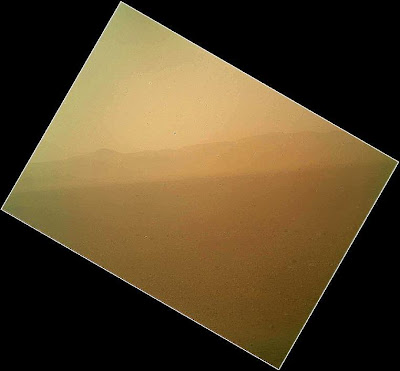 Here it is! The first color surface image from NASA's Mars Science Laboratory (MSL) / Curiosity rover! Granted, it does look as if someone put a smudgy thumbprint on the lens. And if it was one of my photos, that would be a definite possibility! But that is not the case here.

First, let's discuss the time of the image. This was taken on the first afternoon of Curiosity's first full Martian day on the surface, or Sol 1. This began on our calendar date of August 6th.

Second, lets talk about the view. This landscape is to the north of Curiosity and shows the north wall and rim of Gale Crater.

Third, let's talk about the camera. This image was acquired by Curiosity's Mars Hand Lens Imager (MAHLI). The main purpose of the MAHLI is to acquire close-up, high-resolution views of rocks and soil at the rover's Gale Crater field site. The camera is capable of focusing on any target at distances of about 0.8 inch (2.1 centimeters) to infinity. This means it can, as shown here, also obtain pictures of the Martian landscape.

The MAHLI is located on the turret at the end of Curiosity's robotic arm. At the time of this image, the robotic arm was in its stowed position, as it had been since before launch on November 26, 2011. As you can tell from the image, the MAHLI stowed orientation is 30 degrees from the rover deck. The image shown here is corrected for that tilt. The MAHLI is looking out from the front left side of Curiosity, with a view similar to that from the driver's side of a car in the USA.

Finally, let's talk about the smudge. The image is murky because the MAHLI is still wearing its protective dust cover. And guess what. The cover is covered with dust! But not to worry. In the coming weeks, the mission team will perform a checkout of the robotic arm and that dust cover is expected to come off at that time.