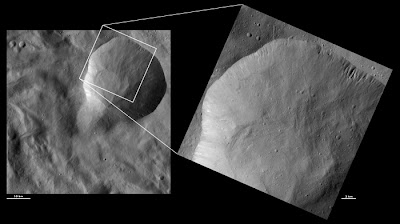 The engineers of NASA's Dawn mission are working away, studying the recent issue with the spacecraft's reaction control wheels. We plan to have more information for you shortly on Dawn's reaction control system, how it works, and what the options are. But in the mean time, let's catch up on some of the high-altitude / low-altitude image comparisons from the mission's time at Asteroid 4 Vesta.

The above Dawn framing camera (FC) images of Vesta show Aquilia crater at both HAMO (high-altitude mapping orbit) and LAMO (low-altitude mapping orbit) resolutions. The left image is the HAMO image and the right image is the LAMO image. Aquilia is the large crater that does not fit completely into the LAMO image. The LAMO image has approximately 3 times better spatial resolution than the HAMO image. In images with higher spatial resolutions, smaller objects can be better distinguished. In the HAMO image, Aquilia crater appears to be a large crater that has structures in its center and around its rim that are probably due to the gravitational movement of the regolith that covers the crater. These structures, gullies along the crater’s rim and ridges and grooves further down towards its center, are more clearly visible in the LAMO image. Tiny craters can also be distinguished on the base of Aquilia crater in the LAMO image.

The Dawn mission to Vesta and Ceres is managed by NASA’s Jet Propulsion Laboratory (JPL), a division of the California Institute of Technology in Pasadena (Caltech), for NASA’s Science Mission Directorate, Washington D.C. UCLA is responsible for overall Dawn mission science. The Dawn framing cameras have been developed and built under the leadership of the Max Planck Institute for Solar System Research, Katlenburg-Lindau, Germany, with significant contributions by DLR German Aerospace Center, Institute of Planetary Research, Berlin, and in coordination with the Institute of Computer and Communication Network Engineering, Braunschweig. The framing camera project is funded by the Max Planck Society, DLR, and NASA/JPL.

To learn more about the Dawn mission, visit: http://www.nasa.gov/dawn and http://dawn.jpl.nasa.gov .
-
Posted by James M. Thomas at 4:00 PM