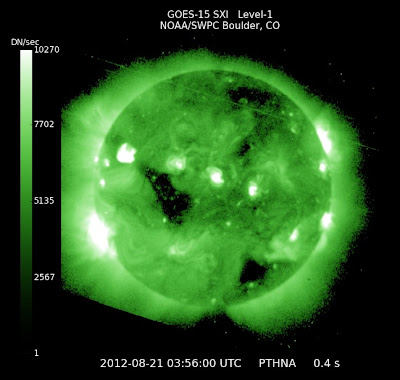 The above X-ray image of the sun was taken August 21st at 03:56 UTC by the Solar X-ray Imager (SXI) aboard the GOES-15 satellite. Image Credit: NOAA

The Sun's activity was very low for August 19th and 20th. The most noise was generated by departing Active Region 1543 (AR 1543), with a B8 solar flare on the 19th at 23:15 UTC, off the northwest limb. AR 1548 also produced a low level B-class flare. Also on the 19th, at 19:18 UTC,  a full halo coronal mass ejection (CME) was observed in SOHO/LASCO C3 coronagraph, with an estimated plane-of-sky speed
of 605 km/s. STEREO-A and STEREO-B COR2 imagery shows this CME to be a back-sided event, not expected to affect Earth. Forecast through the 23rd: Solar activity should range from very low to low with a slight chance for an M-class flare.

Above Earth, the geophysical activity has ranged from quiet to unsettled with an isolated period of activity between the 19th at 21:00 and the 20th at 00:00 UTC. Forecast: The geomagnetic field is expected to range from quiet to unsettled with a slight chance for active conditions on the 21st and 22nd, due to that coronal hole high-speed stream. On the 23rd, conditions are expected to return to predominately quiet levels. Stay tuned...