MSL/Curiosity: And You're Landing How?... 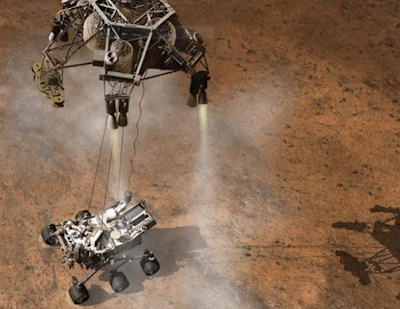 The above image is an artist's concept of the "sky crane" configuration lowering the rover to the Martian surface. Image Credit: NASA/JPL-Caltech

NASA's Mars Science Laboratory (MSL) mission is on track for a Mars Landing later Today. The spacecraft will strike the top of the atmosphere right on target, in a box 3 kilometers (1.9 miles) wide by 12 kilometers (7.5 miles) long.

But then what? Many have looked at the entry-descent-landing (EDL) process — described as the "seven minutes of terror" — and they still scratch their heads and wonder how it will all work. No matter. We will walk through it just for you! Are you ready? here we go...

At about one ton, MSL — also known as the Curiosity rover — is the largest rover sent to Mars and it will hit the upper atmosphere at a blistering 13,200 miles per hour (mph). But Curiosity is protected inside an aeroshell and a massive insulating heat shield. The spacecraft's computer will fire rocket thrusters to adjust its lift during the hypersonic phase of the descent, dipping or climbing as required and flying through broad S-turns to bleed off speed while keeping the craft on course for a pinpoint landing.

After slowing to around 1,000 mph, a huge supersonic parachute will deploy, the heat shield will then be jettisoned and a sophisticated radar altimeter will begin sounding the surface. After slowing to less than 200 mph, the parachute will be jettisoned and the rocket-powered descent stage, with Curiosity underneath, will fall free from the aeroshell. The descent-stage rockets will fire and continue slowing the rover.

Curiosity's descent stage — playfully described as Curiosity's jet pack — does not have any legs. But that's okay because it won't need them. Instead, it will lower the rover directly to the surface on the end of four 25-foot-long cables, also called the bridle. This hanging configuration is called the "sky crane," a nod to that particular Sikorsky helicopter configuration. When the flight computer senses there is weight on Curiosity's wheels, the bridle will be cut, the jet pack flies safely away from the rover, and Curiosity is ready for its initial tests and checkout.

Mars touchdown is expected at 1:17 AM EDT (GMT-4) Monday, but it will take radio signals confirming the event 13.8 minutes to cross the 154-million-mile gulf between Earth and Mars. That translates to 1:31 AM "Earth-received time."

Engineers at the Jet Propulsion Laboratory (JPL) in Pasadena, California, will be relying on NASA's Mars Odyssey orbiter to relay entry, descent and landing telemetry back to Earth and to confirm a successful touchdown. If Odyssey has problems, or if any issues crop up with Curiosity's transmitter, it could take several hours for that long-awaited confirmation to arrive. In either case, the mission team expects to have confirmation that Curiosity is "wheels down," safely inside Gale crater.

The mission team will spend almost the entire month of August checking out the vehicle and getting the first images. Of course, they will be getting science data during that time, but their focus will be doing engineering checkouts of the instruments, of the sampling system, changing flight software, and doing other things. The team expects that by early September they can do their first drive if Curiosity.