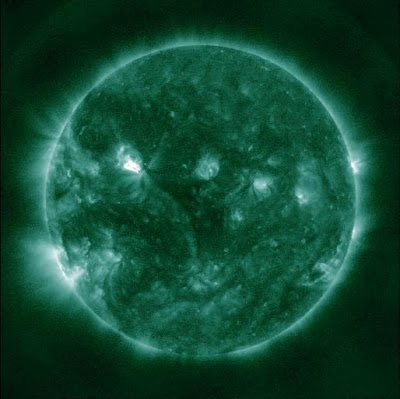 The above image was taken August 22nd at 16:58 UTC by the Atmospheric Imaging Assembly (AIA), at 94 Angstroms, aboard the Solar Dynamics Observatory (SDO). The B6-class solar flare produced at that time by Active Region 1548 (AR 1548) can be seen just to the left of center. Image Credit: SDO/AIA

For the end of August 21st and most of the 22nd, the solar activity was very low. Beginning at 20:24 on the 21st, SOHO's LASCO C2 coronagraph observed a full halo coronal mass ejection (CME), having an estimated plane-of-sky speed of 884 km/s. Observations by the STEREO-A and STEREO-B satellites showed this to be a back-sided CME, not expected to have any affect on Earth. On August 22nd at 09:30 UTC, SDO/AIA instrument, at 193 Angstroms, recorded a filament eruption near Active Region 1549 (AR 1549). And a CME was subsequently recorded by SOHO's LASCO/C2 coronograph at 10:12 UTC, and the LASCO/C3 coronograph recorded the CME at 11:18 UTC. Analysis is underway to determine whether this CME could affect Earth. The biggest comotion for the time period came from Active Region 1548 (AR 1548), which produced a B6 solar flare on August 22nd at 16:58 UTC. Forecast: The solar activity is expected to be very low with a slight chance for C-class flars through August 25th.

Earth's geophysical activity has ranged from quiet to unsettled. Forecast: The geomagnetic field is expected to be predominantly quiet through August 25th. Stay tuned...