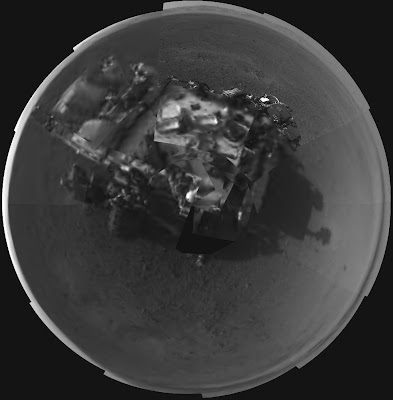 The above overlapping images, of various resolutions (some are thumbnails), compose Curiosity's first 360-degree self portrait. The images are shown here in a polar projection, with the rover in the center and the horizon around the edges. And here is something very interesting to consider: The rotating mast cannot be seen directly in these images because the Navcams taking the images are located on the mast. But even so, the mast can be seen in Curiosity's shadow to the right.

Also in the latest batch of Navcam images are two showing that the thrust from the descent-stage rockets actually dug a one-and-a-half-foot-long (0.5-meter) trench in the surface nearby. The team members think they can see exposed Martian bedrock at the bottom of the trench, just waiting to be studied. The members see this as an amazing and unexpected gift that will provide valuable data they can use going forward.