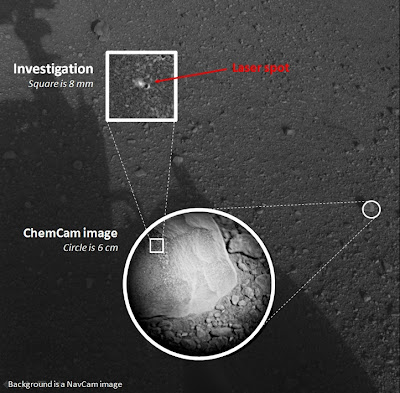 Above is a composite image, with magnified insets, depicting the first laser test by the Chemistry and Camera (ChemCam) instrument aboard NASA's Curiosity Mars rover. In the main NavCam image, the small circle on the right indicates the "Coronation" rock (6 cm in diameter). In the expanded, ChemCam view of "Coronation" at the center," the small square (8 mm across) indicates the target for ChemCam. In the expanded, ChemCam view of the target at the top, the red arrow indicates the point of contact for the ChemCam laser. Image Credit: NASA/JPL-Caltech/LANL/CNES/IRAP

We have "first burn!" The Chemistry and Camera (ChemCam) instrument aboard NASA's Mars Science Laboratory (MSL) / Curiosity rover was used on the Martian surface for the first time August 19th. ChemCam fired its laser at "Coronation," a fist-size rock, with 30 pulses during a 10-second period. Each laser pulse delivers more than a million watts of power for about five one-billionths of a second.

The energy from the ChemCam laser excites atoms in the rock into an ionized, glowing plasma. A built-in telescope catches the glow and uses three spectroscopes to analyze the light spectrum for information about the elements in the target.
ChemCam recorded spectra from the laser-induced spark at each of the 30 pulses. The goal of this initial use of the laser on Mars was to serve as target practice for characterizing the instrument, but the activity may provide additional value. Researchers will check whether the composition changed as the pulses progressed. If it did change, that could indicate dust or other surface material being penetrated to reveal different composition beneath the surface. The spectrometers record intensity at 6,144 different wavelengths of ultraviolet, visible and infrared light.

The ChemCam scientists reported that the data from the test were even better than they had during tests on Earth, in regard to signal-to-noise ratio. The results excited the ChemCam team even more about the science their instrument will make possible during possibly thousands of targets over the two Earth-years of the primary mission.

The technique used by ChemCam, called laser-induced breakdown spectroscopy, has been used to determine composition of targets in other extreme environments, such as inside nuclear reactors and on the sea floor, and has had experimental applications in environmental monitoring and cancer detection. Today's investigation of Coronation is the first use of the technique in interplanetary exploration.

Curiosity landed on Mars over August 5th/6th, beginning a two-year mission using 10 instruments to assess whether a carefully chosen study area inside Gale Crater has ever offered environmental conditions favorable for microbial life.

And now, the mission and instrument particulars...