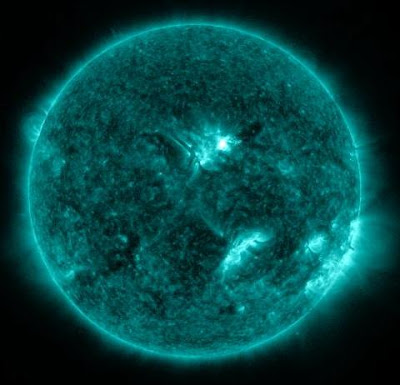 The above image shows the Sun on August 14 at 00:31 UTC, the time of the C3-class solar flare produced by Active Region 1543 (AR 1543), shown at above center. The image was taken by the  Atmospheric Imaging Assembly (AIA)  aboard the Solar Dynamics Observatory (SDO). Image Credit: SDO/AIA

Remember that C2-class solar flare produced August 13th at 12:40 UTC by Active Region 1543 (AR 1543)? Well, we now have confirmation that an Earth-directed partial-halo coronal mass ejection (CME) was produced. Soon after, at 13:25 UTC, the Large Angle and Spectrometric Coronagraph Experiment (LASCO) instrument aboard the Solar and Heliospheric Observatory (SOHO) observed the CME.

On August 14th, the largest solar event was a C3-class solar flare, also produced by AR 1543, at 00:31 UTC. And subsequent to the flare, another Earth-directed partial-halo CME was observed by LASCO at 01:30 UTC. Looking forward, the solar activity is expected to be low with a slight chance for an isolated M-class flare.

To learn more about the Sun and to stay current on solar activity, visit the mission home pages of the Solar Dynamics Observatory (SDO), sdo.gsfc.nasa.gov and the Solar and Heliospheric Observatory (SOHO), sohowww.nascom.nasa.gov .