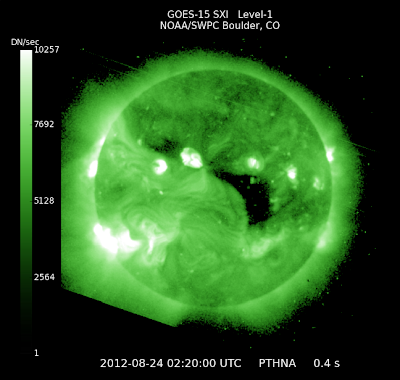 The above X-ray image of the sun was taken August 24th at 02:20 UTC by the Solar X-ray Imager (SXI) aboard the GOES-15 satellite. Two coronal holes may be seen in as the dark regions, where there is no corona (hence, coronal hole). Image Credit: NOAA

The solar activity was very low for the end of August 22nd and most of the 23rd. All designated active regions were quiet and stable. And to add to them, Active Region 1553 (AR 1553) was numbered. A few low-level B-class flares were observed, but nothing more. And No Earth-directed coronal mass ejections (CMEs) were observed. Forecast through August 26th: Solar activity is expected to be very low with a slight chance for C-class flares.

A coronal hole is an area where the Sun's corona is darker, and colder, and has lower-density plasma than average. Coronal holes were found when X-ray telescopes in NASA's Skylab mission were flown above the Earth's atmosphere to reveal the structure of the corona. Coronal holes are linked to unipolar concentrations of open magnetic field lines. During solar minimum, coronal holes are mainly found at the Sun's polar regions, but they can be located anywhere on the sun during solar maximum. The fast-moving component of the solar wind is known to travel along open magnetic field lines that pass through coronal holes.

A stream of solar wind flowing from a large coronal hole should reach Earth over August 26th/27th. High-latitude sky watchers should be alert for auroras during that time. Stay tuned...