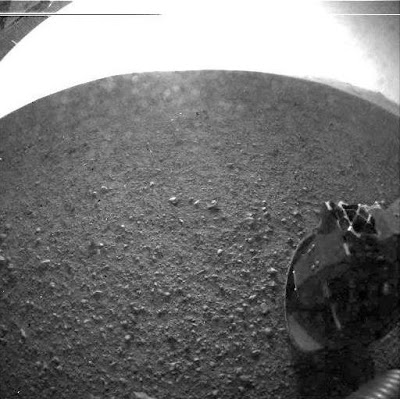 The above image is a higher-resolution version of the first "thumb nail" image from NASA's Mars Science Laboratory (MSL) / Curiosity rover, sent just minutes after it's picture-perfect touchdown inside Gale Crater on Mars. The black-and-white image was taken by Curiosity's rear-left Hazard-Avoidance camera (Hazcam). This version was transmitted about two hours after landing. This image is actually half the size of the full-resolution Hazcam images that are possible. These images will be used by the mission navigators and rover drivers to help plan Curiosity's next drive. Rest assured that there are other cameras aboard Curiosity that have color capability and a much higher resolution. It is expected that those lovely shots will begin coming back to Earth over the next several days.

To recap, the MSL team received radio confirmation August 5th at 10:32 PM PDT (August 6th at 1:32 AM EDT / 05:32 UTC), that Curiosity was down and healthy on the Martian surface. Team members will be busy for the next few weeks, checking out the rover and preparing for full science operations. But we expect to see some pretty pictures every now and then. And we will definitely be looking for them.