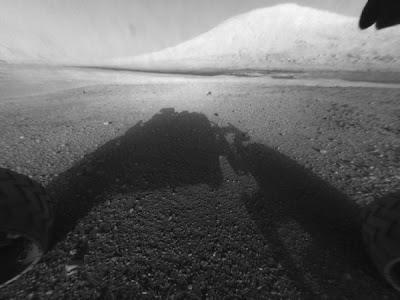 And there it is — the ultimate objective of NASA's Mars Science Laboratory (MSL) mission. Nicknamed "Mount Sharp," the feature was formally named Aeolis Mons in May 2012 by the International Astronomical Union (IAU). The peak has a height of 3.4 miles, taller than Mount Whitney in California. The dark bands at the base are dunes. The Curiosity team plans to drive the rover to the mountain to investigate its lower layers, which scientists think hold clues to past environmental change.

The image was captured by Curiosity's front-left Hazard-Avoidance camera (Hazcam) at full resolution shortly after the rover landed. The image has been linearized to remove the distorted appearance that results from its fisheye lens. The shadow of Curiosity can be seen in the foreground.

Okay. Let's review these names. Who was Gale (namesake of Gale Crater), and who was Sharp?

Walter Frederick Gale (1865 - 1945) was an amateur astronomer from Sydney, New South Wales, Australia. In addition to discovering numerous comets, Gale observed Mars and erroneously described the presence of canals on the surface.

American geologist and planetary scientist Robert Phillip Sharp (1911 - 2004) was an expert on the geological surfaces of the Earth and the planet Mars. Sharp was a former head of the geological sciences division at the California Institute of Technology (Caltech). Oh. And don't worry that Sharp has lost his place on the maps of Mars. When the mountain in Gale Crater was formally named Aeolis Mons, Sharp got a crater all of his own, about 260 km to the west. But since the Jet Propulsion Laboratory (JPL) is managed by Caltech, I can see why the MSL mission folks would hang on to the name "Mount Sharp."