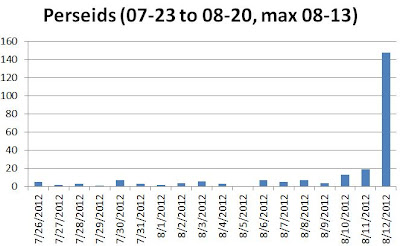 The above chart shows the number of Perseid fireballs recorded through August 12th by the eight cameras of NASA's All Sky Fireball Network (fireballs.ndc.nasa.gov). Image Credit: James M. Thomas

148! I kid you not. NASA's All Sky Fireball Network (fireballs.ndc.nasa.gov) managed to determine that 148 of the fireballs it recorded during the dark hours of August 12th UTC were, in fact, from the Perseid meteor shower. What a jump from the counts recorded in the mid- and upper-teens on the two previous evenings. I guess there can be little doubt that Earth has experienced, and possibly still is experiencing, the maximum of this annual shower. Of course, we should note that these observations were gathered from multiple locations. The Network currently has eight video cameras, with two in New Mexico and the rest spread over Alabama, Georgia and South Carolina. For these Network observations, a fireball is defined as any meteor with a brightness equal to Venus or brighter.

But even with the maximum possibly waning, there is still time to see some Perseids. The shower runs from July 23rd through August 20th. Whether fireball or run-of-the-mill meteor, you are sure to see at least a few Perseids if you observe from a reasonably dark sky.

Perseids enter the atmosphere at about 59 km/second (37 miles/second) and are yellow in color. The Perseid shower occurs each year when Earth passes through the debris trail of Periodic Comet 109P/Swift-Tuttle, also called Comet 1862 III, discovered on July 16, 1862 by American astronomer Lewis A. Swift and then independently discovered three days later by American astronomer Horace Parnell Tuttle. Perseid meteors appear to radiate from a point in the constellation of Perseus (Right Ascension 03hrs 04min, Declination +58°). This year, the zenithal hourly rate (from a single location) is expected to reach 60.