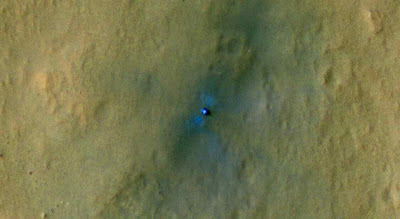 NASA's Mars Reconnaissance Orbiter (MRO), using its High Resolution Imaging Science Experiment (HiRISE), took its first color image of the landing site of NASA's Mars Science Laboratory (MSL) / Curiosity rover mission. Above is a color-enhanced version of the image and shows details of the layered bedrock on the floor of Gale Crater.

Curiosity appears as a double bright spot plus shadows from MRO's perspective, looking at its shadowed side, set in the middle of the blast pattern from the descent stage. MRO acquired this image from an angle looking 30 degrees westward of perpendicular. The MRO team plans to, in a few days, get another image looking more directly down, showing the rover in more detail and completing a stereo pair that will allow for a three-dimensional view of the site.

In other news, Curiosity has finished that four-day process of transitioning both of its redundant main computers to flight software for driving and using tools on the rover's arm. During the latter part of the spacecraft's 36-week flight to Mars and its complicated descent to deliver Curiosity to the Martian surface on August 5th, PDT (August 6th, EDT and Universal Time), the rover's computers used a version of flight software with many capabilities no longer needed. The new version expands capabilities for work the rover will do now that it is on Mars.

The MSL team is now performing functional checkouts of the science instruments and preparations for a short test drive. The first drive, possibly within a week or so, will likely include short forward and reverse segments and a turn. Curiosity has a separate drive motor on each of its six wheels and steering motors on the four corner wheels. Preparation and testing of the motor controllers will precede the first drive.

After the test drive, the planning schedule has an "intermission" before a second testing phase focused on use of the Curiosity's robotic arm. For the intermission, the 400-member science team will have the opportunity to pick a location for Curiosity to drive to before the arm-testing weeks.

Researchers have been examining images from Curiosity's cameras and HiRISE to identify potential targets to investigate near the rover and on the visible slope of the nearby three-mile-high mound informally named "Mount Sharp" (officially named Aeolis Mons by the International Astronomical Union).

During a prime mission of nearly two years, researchers will use Curiosity to investigate whether the selected area of Mars has ever offered chemical ingredients for life and other environmental conditions favorable for supporting microbial life. Curiosity carries 10 science instruments with a total mass 15 times as large as the science payloads on NASA's Mars rovers Spirit and Opportunity.

To handle this science toolkit, Curiosity is twice as long and five times as heavy as Spirit or Opportunity. The landing site inside Gale Crater places the rover within driving distance of layers of Mount Sharp. Observations from orbit have identified clay and sulfate minerals in the lower layers, indicating a wet history.

The Jet Propulsion Laboratory (JPL), a division of the California Institute of Technology, in Pasadena, manages the Mars Science Laboratory and Mars Reconnaissance Orbiter missions for NASA's Science Mission Directorate, Washington. JPL designed and built Curiosity. HiRISE is operated by the University of Arizona in Tucson. The instrument was built by Ball Aerospace & Technologies Corp. in Boulder, Colorado. Lockheed Martin Space Systems in Denver built the orbiter.

For more about the Mars Reconnaissance Orbiter, visit www.nasa.gov/mro . To see thousands of images from HiRISE, visit hirise.lpl.arizona.edu .