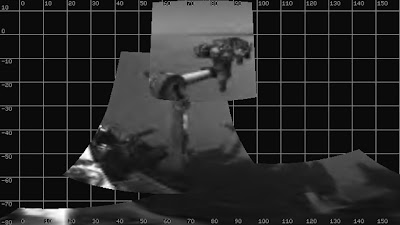 We all know how good it is to stretch after being cooped up during a long trip. And NASA's Mars Science Laboratory / Curiosity rover mission team would definitely agree.

On Monday, August 20th, Curiosity flexed its robotic arm for the first time since before launch in November 2011. The 7-foot-long (2.1-meter-long) arm maneuvers a turret of tools including a camera, a drill, a spectrometer, a scoop and mechanisms for sieving and portioning samples of powdered rock and soil.

Weeks of testing and calibrating arm movements are ahead before the arm delivers a first sample of Martian soil to instruments inside the rover. The August 20th maneuver checked motors and joints, extending it forward using all five joints, then stowing it again in preparation for the rover's first drive.

The turret has a mass of about 66 pounds (30 kilograms). Its diameter, including the tools mounted on it, is nearly 2 feet (60 centimeters). Once the robotic arm is completely checked, the Curiosity team will begin using the arm with the rover's sampling system. The first drive is planned for later this week.

Landed into Mars' Gale Crater over August 5th/6th, NASA's Mars Science Laboratory / Curiosity rover mission is managed for NASA’s Science Mission Directorate, Washington, D.C., by the Jet Propulsion Laboratory (JPL), a division of the California Institute of Technology in Pasadena (Caltech). More information about Curiosity is online at www.nasa.gov/msl and mars.jpl.nasa.gov/msl . You can follow the mission on Facebook at: www.facebook.com/marscuriosity and on Twitter at: www.twitter.com/marscuriosity .