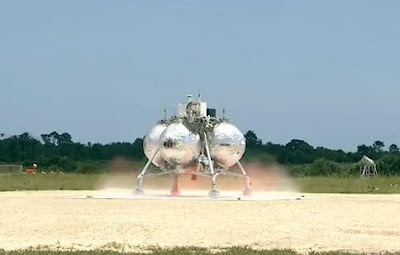 The above image shows the August 9th launch of the prototype of the Morpheus Lander craft lander. Image Credit: NASA

Around 12:40 PM EDT on August 9th at NASA's Kennedy Space Center (KSC) in Florida, a prototype of the Morpheus Lander craft crashed and burned during a trial run. The vehicle rose 10 feet into the air, turned over, fell to the ground and burst into flames. The Morpheus tests were being conducted at the north end of the former Space Shuttle Landing Facility. No one was injured in the crash and explosions.

NASA's Project Morpheus lander is an experimental vehicle designed with a view toward future US space missions beyond Earth's orbit. The project is named for the Greek god of dreams. To date, NASA has invested about $7 million in the relatively low-budget project over the past two-and-a-half years. The prototype vehicle was worth about $500,000.

The lander measured 10 feet in diameter and weighed 2,300 pounds without fuel. The vehicle burned a mixture of liquid oxygen and liquid methane, a technology NASA thinks will benefit future landing or in-space propulsion systems.

The prototype had undergone nearly a year of testing at the Johnson Space Center (JSC) in Houston. Two weeks prior to the August 9th test and crash, Morpheus had arrived at KSC to begin what was expected to be more than a dozen flights over several months. These flights would have included use of a hazard field of rugged terrain, similar to the surface of the Moon, complete with an array of boulders, rocks, slopes and craters.

Beginning August 3rd, the vehicle had operated successfully in several tethered flights. In those flights the vehicle was fastened to a harness and suspended from a crane.

On Tuesday, August 7th, the Morpheus team attempted its first free flight. But the vehicle had barely lifted off when a sensor failure caused an engine cutoff and safe abort of the flight.

NASA engineers are looking into test data to determine the exact cause of the August 9th accident, details are not available as of yet. NASA has acknowledged that failures were anticipated and are part of the development process for any complex spaceflight hardware.

NASA officials acknowledged the crash was a disappointment, but said the Morpheus program could continue testing with a new lander in a matter of months. A second prototype was already under construction at JSC. Once the cause of the crash is identified, the corrections can be applied to the next prototype and testing can resume, possibly with two or three months, pending the outcome of the investigation.