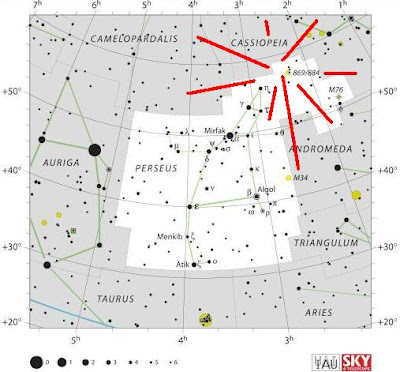 The above image is a chart of the constellation Perseus, presented by the International Astronomical Union (IAU). The location of the radiant point of the Perseid meteor shower is indicated by the radiating red lines. Image Credit: IAU and Sky & Telescope magazine (Roger Sinnott & Rick Fienberg)

The Perseid meteor shower is one of the three best annual showers, the other two being the Orionid shower, which peaks around October 21st, and the Geminid shower, which peaks around December 13th. This year's Perseid meteor shower began on July 23rd and the maximum is not expected until August 11th/12th. But even so, intermittent fireballs are already being seen. So who knows? Things might get very interesting by the time we come to mid-August.

Perseid meteors are visible from July 23rd through August 22nd with the peak on Saturday/Sunday, August 11th/12th. This is a reliable shower, giving consistent hourly rates. The rate does vary over the years as Earth passes through different points in the debris from the parent body, Comet 109P/Swift-Tuttle. This year, the zenithal hourly rate is expected to reach 60.

Perseids enter the atmosphere at about 59 km/second (37 miles/second) and are yellow in color. As we already noted, the Perseid shower occurs each year when Earth passes through the debris trail of Periodic Comet 109P/Swift-Tuttle, also called Comet 1862 III, discovered on July 16, 1862 by American astronomer Lewis A. Swift and then independently discovered three days later by American astronomer Horace Parnell Tuttle. Perseid meteors will appear to radiate from a point in the constellation of Perseus (Right Ascension 03hrs 04min, Declination +58°).

This year, Perseid observers will have to deal with a crescent Moon on and about the morning of August 11th. So around that date, concentrate your nightly observing around local midnight and a few hours after. Of course, you can still observe with the Moon visible in your sky, but the light from even a crescent Moon will affect the dark adaptation of your eyes. So avert your vision away from the Moon as much as possible. And as always, find the darkest location that you can in order to optimize the number of meteors you might see.