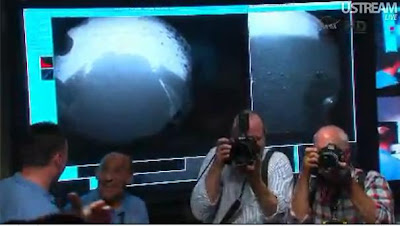 The above image shows images from two of the cameras aboard NASA's Mars Science Laboratory (MSL) / Curiosity rover, just minutes after touchdown on the Red Planet (August 5th at 10:32 PDT). The images were relayed by the Mars Odyssey spacecraft just before it moved over the horizon. The two images are shown here on one of the large displays in MSL mission control. There will be more images in the coming days, but these few just helped to make the moment of landing that much sweeter. The above images are provided by NASA through its Ustream channel.