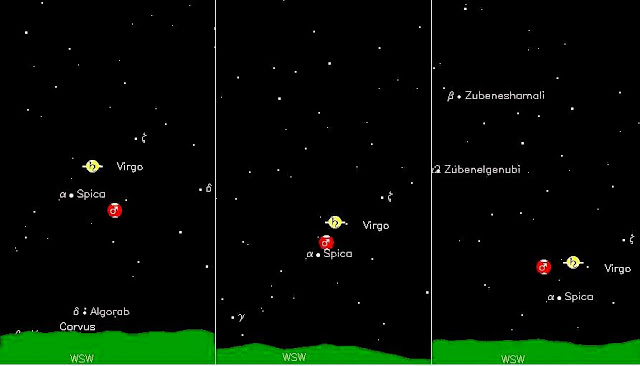 The above three images show the positions of Saturn (yellow symbol), Mars (red symbol) and the bright star Spica for three evenings in August. The location of the observer is about 28 degrees north latitude. The left image is August 4th, the middle image is August 13th, and the right image is August 19th. All times are about 9 PM local, 10 PM Daylight Savings. The image was produced using Your Sky software by John Walker (www.fourmilab.ch/yoursky/).

As NASA's Mars Science Laboratory (MSL) / Curiosity rover prepares to land on Mars, many people may not realize they can go out after sunset and see the Red Planet for themselves with their unaided eyes.

You can step outside this week to spot Curiosity's destination low in the west after sunset. Mars is joined in the sky by Saturn and the bright star Spica (pronounced "SPY-ka"), in the constellation Virgo. All three bodies are nearly equal in brightness, and they currently make a striking celestial triangle about 5 degrees on a side — you could cover the triangle with your outstretched palm. Spica's color is blue-white, Saturn is golden, and Mars is reddish-orange.


Over the August evenings, Saturn will appear stationary, but Mars will move eastward. By the evenings of August 13th and 14th, Mars will be positioned between the other two, forming a nearly straight line. After that, Mars will continue eastward and form a second equilateral triangle about a week later. And a thin crescent Moon joins the trio on August 21st and adds to the spectacle.


The nearly equal brightness of these three beacons belies their true distances. Moving at the speed of light, Mars is 13.8 minutes from Earth. Saturn is 83 minutes away. And Spica, the most distant by far, is about 260 light-years away (give or take 20 light-years).


We called Spica a star, but that is not correct. Spica is actually a double — two stars. Astronomers cannot see the separate stars telescopically. Instead, they learned by studying the light spectrum, which told them there were two stars, what kind of stars they were, and how fast they moved around each other. This information, along with some reasoning, allowed the astronomers to calculate the stars' distances from each other and work out other other characteristics.


Spica is a binary system of two blue-white stars, one a giant and the other a super-giant. These orbit each other at a distance of about 18 million kilometers (11 million miles). In contrast, Earth orbits the sun at a distance of 150 million kilometers. The mutual gravity of the two stars distort their shape from spherical, to an egg shape, with the pointed ends facing each other as they orbit, completing one orbit every four days.

In the evening, as you await the landing of Curiosity, and in the evenings after, take the time to enjoy the sky show awaiting you just outside your door.