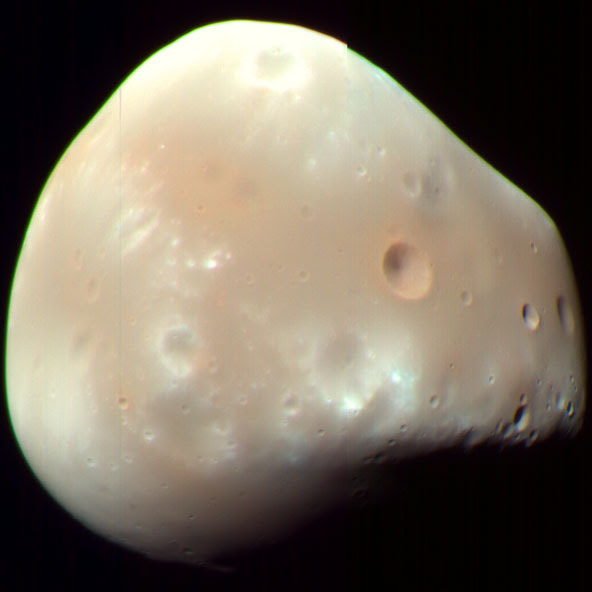 The above image is a close-up of the Martian satellite Deimos, taken March 9, 2009 by the HiRISE instrument aboard NASA's Mars Reconnaissance Orbiter. Image Credit: NASA/JPL-Caltech/University of Arizona

Hall discovered Deimos from the United States Naval Observatory in Washington, D.C. Based upon the recording method of the time, the day of discovery was August 11th. But based upon today's conventions, Hall made his discovery on August 12, 1877 at about 07:48 UTC. You see, Hall originally recorded "August 11 14:40" Washington mean time. In that era, the astronomical convention was to mark the beginning of the of the day at noon rather than midnight. So by adjusting for the 12 hours difference between noon and midnight, and then the 5 hours difference between Eastern Time and Greenwich Mean Time (GMT), and then the few minutes difference between local time and Eastern Time, we arrive at 07:48 UTC on August 12, 1877.

Hall would go on to discover Mars' other satellite a few days later. But that's another anniversary...

The Martian satellite names were originally spelled Phobus and Deimus. The names were suggested by Henry Madan (1838–1901), Science Master of Eton, from Book XV of the Iliad, where Ares (the Roman god Mars) summons Dread (Deimos) and Fear (Phobos).

In addition to his discovery of the Martian satellites, Hall determined the orbits of satellites of other planets and of double stars, the rotation of Saturn, and the mass of Mars.